“If we all could see the world through the eyes of a child, we would see the magic in everything.” – Unknown

Imagination and creativity are two things that I often think about. For many years, I didn’t bat an eye to my imagination nor give it the proper attention. Like everything else, it went away. Trying to re-kindle such a deeply creative side of you after so long takes a great amount of work. I will look through my Instagram feed often and see so many images that are so unbelievably creative and say to myself, “Gosh, I wish that I would have thought of that!” Every day, I exercise my imagination more and more and see the progress but there are times where I wish I could go back and see the world through the wonderment of my five-year-old self. You know, the one who played Barbie, imagining she was Bell from Beauty and the Beast, but more bad a$$… like, save the world Bell. Then, sometimes, the Universe answers and presents you with an opportunity to channel that child-like creativity. My dear friend Kristen, allowed me to dream up this image called “Field of Dreams”.

Kristen herself, embodies that child-like whimsy that keeps her young, spunky and fun. She IS Field of Dreams. When she told me that she was coming to Denver and wanted to do a photoshoot with me, I instantly went to work. Kristen has a very fairytale inspired look and I fully wanted to take advantage of it! In this image, what I really wanted to depict was my nostalgia of how my five-year-old self saw the world but that it’s also never too late to look at the world through a lens of magic.

This year, I have made it one of my top goals to read 24 books (24 more than I have read in any given year since I was a very young kiddo). One of the benefits of reading stories, is immersing oneself into the author’s world but injecting our own imagination to allow the story to come to life. I wanted to represent that in this image. I wanted whatever story that Kristen was reading to come to life in someway.

The world around this character is intended to resemble what she is imagining while she reads – her field of dreams so to speak. The best part is that people are influenced by what is around them so to her, birds might resemble cranes. Or the act of reading gives her imagination flight and makes her feel like she has elevated herself into a completely different world. There are so many things about Field of Dreams that I love, but what I love most is giving myself permission to imagine like a child would.

I am so grateful to Kristen for allowing me to pose her in a field close to where I work. The best part was explaining my vision and then showing her the result.

Will you allow yourself to see the wonderment and magic in this world like a child would? After you have, what does that world look like for you?

How Field of Dreams Came Together

Scroll down for photos and the quick Photoshop Layers Video 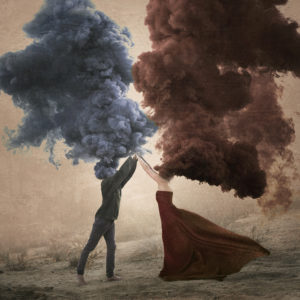